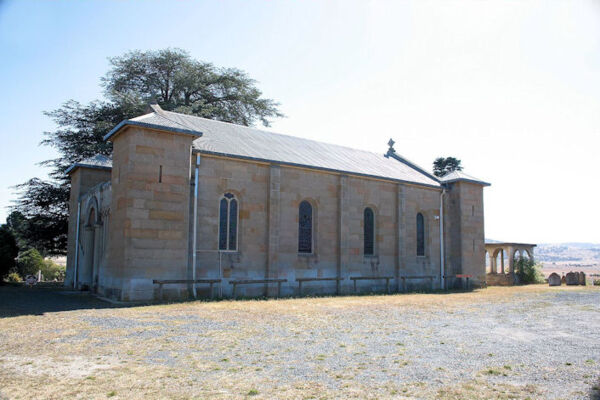 The first known divine service was held in a stable adjoining the Military Barracks at Pontville, in 1829, and in a record, amongst the church papers, it is said that the service was not well attended because of nature of the building. Services were also held at the Brighton :schoolhouse, and in 1831 a meeting was called to discuss the erection of a suitable church for the district. Built by Joseph Moir at a cost of approximately £2,600.

A Romanesque styled church built between 1839 and 1841 to a design of convict architect James Blackburn from local white freestone.

As far as it is known, the foundation stone of St. Mark's was placed in position by Sir John Franklin, the Lieutenant Governor of Tasmania, in 1839. Amongst the subscribers to the building of the church were many prominent pioneers of the Brighton and Kempton districts, including Mr Armitage, Bagdad, £25; Mr Butler, £37; Mr Kimberley, £50; Mr Lacky, Bagdad, £30; Mr Stansfield, Green Point, £20; and others, whose donations ranged from £1 to £10.

In a report to the S.P..C.K. committee at Hobart on October 5th of 1840, it was stated that the Pontville Church had been roofed in. In February, of the following year, the church was completed at a cost of approximately £1300. It was opened for divine service and dedicated on February 21st, 1841, it is believed, by Archdeacon William Hutchins. It was one of the last churches completed during his administration. The opening service must have been well attended for the collection amounted to £22.