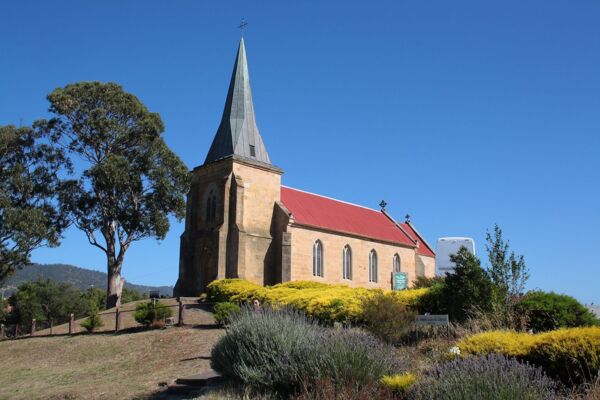 St John's Church can be traced back to Australia's first Catholic bishop, John Polding who visited Van Diemen's Land, as Tasmania was then known, in 1835. He visited the Richmond area pledging to erect a church of behalf of the local Catholics. A local by the name of John Cassidy gave land for church building purposes.

The church measures 15m long by 6m wide. It has four windows in each side with wooden Gothic Y-tracery. The Gothic design of the church appears to be one of a small portfolio that Polding brought to Australia. Local residents raised 700 for the project and the Governor promised 500. Tenders were called in the same year and the successful builder was Mr. Buscombe.

St John's was opened on 31 December 1837. The first pastor, Fr James Ambrose Cotham, who had accompanied Polding out from England in 1835, preached at the Mass.

The Church is a two-compartment building with nave, separate chancel, a sacristy against the chancel north wall and a central western tower and spire. The church is constructed from coursed sandstone and has corrugated iron roofs and a plastered interior.

It was designed by the Bath architect Henry Edmund Goodridge in 1836-7 and opened on 31 December 1837.

By 1893 the spire had decayed beyond repair and was replaced by one designed by the Launceston architect Alexander North. This was also decayed to a point that by 1972 it necessitated a replacment. This time it was to be a shorter and more proportioned version of the original spire.

Alterations and the addition of the tower took place in 1859 and on 15 February 1859 the considerably enlarged church was re-opened with High Mass celebrated by Bishop Willson.

The original spire was replaced in 1893 by a much shorter spire. Designed by Alexander North, the spire had bands of darker imbricate slate and four over-scale lucarnes as part of its design.

During 1928 and 1929 a major renovation of the church took place Much of the work concerned the furnishings, works were carried out on the structure, including repair and re-pointing of the stonework, installation of a wooden ceiling replacing the plaster one, remediation of the chancel floor and the cutting of a door in the west wall of the sacristy replacing the original two windows.