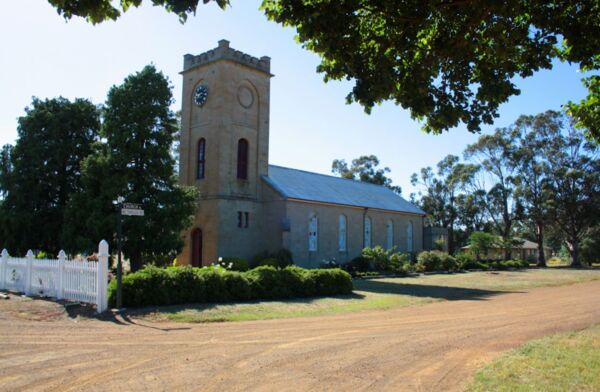 Of Georgian design the church is built of sandstone from a design by colonial architect John Lee Archer and erected between 1834 and 1836. The foundation stone was laid on 3 February 1834 by Governor Arthur. The church was still uncompleted when the sexton William Chambers and Mary Heyward were married on 11 March 1836.

The subscribers to the church paid no pew rents until their subscription had been liquidated. At first the rent was five shillings a seat. The clock was installed in 1922 although made in England in 1828 it was originally hung in St David's church Hobart. The stone came form a nearby Quarry while the timber was sourced from Port Arthur.

Bishop Broughton consecrated the church on 19 May 1838.

The organ was built in 1868 by Bevington & Sons, London, for Trinity School Room, Launceston.