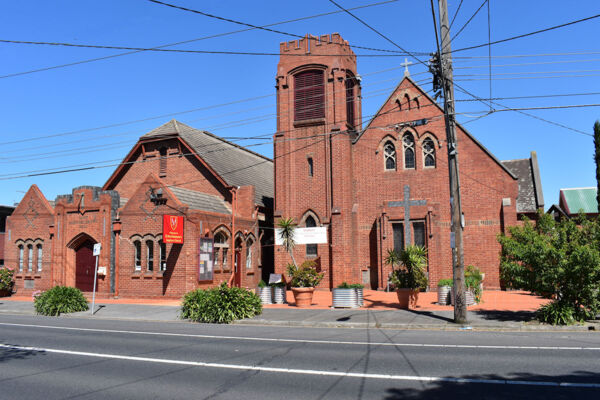 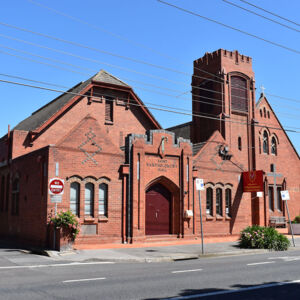 Plans to erect a church were well underway by 1849 when the government granted land at the corner of Bridge Road and Church Street on which to build 'a church, school house, and parsonage'. In May 1870 land at the South East corner of Burnley and Swan Street, East Richmond, or Burnley as the area was becoming called, stretching back as far as the railway, was granted by the government for the erection of another Church of England. It was on this site that Saint Bartholomews was later to be erected and remain until 1926.

A plan of the proposed building was prepared by Messers Langford and Hutchinson, and submitted to St. Stephens' vestry in September. It was received `with great satisfaction'. Tenders were called and that of Mr Robert Hutchinson of Swan Street was accepted, construction commencing in October, 1884. The building cost £378.

Plans for the erection of a more substantial church were put aside for some years as a result of the depression. In December 1903, shortly after the induction of the Reverend William Alfred Shaw the existing church was moved back 120 feet towards the railway to enable the proposed brick church to occupy the position at the corner of Burnley and Swan Streets. The foundation stone of the new St. Bartholomews church was laid by the Archbishop of Melbourne, The Most Reverend Henry Lowther Clarke, on the 16th July 1910. The Archbishop returned to conduct the opening and dedication service on the 6th December 1910 when over 600 people attended, of whom at least 200 were unable to be accommodated in the church.

The new building, of gothic design, consisted of a nave, a chancel, sancturary, vestry, p orch. and a baptistry. A large gothic arch led to the chancel where the choir were seated. The church was surmounted by a small tower and a steeple. Designed by architects Thomas Watt and Son and built by Mr J. Currie of Camberwell, the total cost was about £1500.

Windows
With the exception of the Livermore memorial window the windows of the church were transferred from the previous building and all date from 1910. Saint Bartholomew depicted in the central of the three windows behind the altar. These windows were donated by a devoted lady worshipper and were the work of Brooks Robinson and Co. At the opposite end of the church, high above the bapistry a window described as a "striking example of the leadlighters art', in glass and colours was erected in 1910 to the memory of Mr Edwin Lever secretary to the church for 17 years. The maker was Mr W.S. Hardy who at the same time supplied the other windows for the church.

The Bells
A peal of 8 chimed bells, tuned to the diatonic scale is in the Soldiers Memorial Tower. Installed by John Danks and Son Pty Ltd; they are believed to be the heaviest peal yet cast by an Australian bell founder. The peal was a gift of Mrs Challingsworth, an early member of the church. The tenor bell, the heaviest, weighs one ton, and was dedicated on 6th March 1927. The remainder of the peal was dedicated at a service held in the evening of the 3rd March 1929, after which selections were played on the bells by a party of bell ringers from St. Pauls Cathedral.

A Foundation stone on the Church building reads, " This stone was laid by his Excellency The Governor of Victoria Lord Somers K.C.M.G. D.S.O. on 25th July 1926. As a memorial to the soldiers from this parish who fell in the Great War 1914 - 1918. Rev G. Gilder ThL Vicar, Gawler & Drummond F.F.R.V.I.A. Architects".

A Foundation stone on the Hall reads, " This stone was laid to the Glory of God by His Grace the Archbishop of Melbourne Dr Harrington C Lees Saturday 19th December 1925. Rev G Gilder Vicar Gawler & Drummond F.F.R.I.V. Architects".

The Organ he pipe organ was first used at the church during a service held on the 12th October 1913. It had been built by George Fincham of Richmond in 1887 for the newly erected St. Michaels Roman Catholic Church, (now Cathedral) at Wagga Wagga in Ne w South Wales, Melbourne Grammar School bought the instrument in 1893 for installation in their chapel and it was from the school that the organ was acquired in 1913.