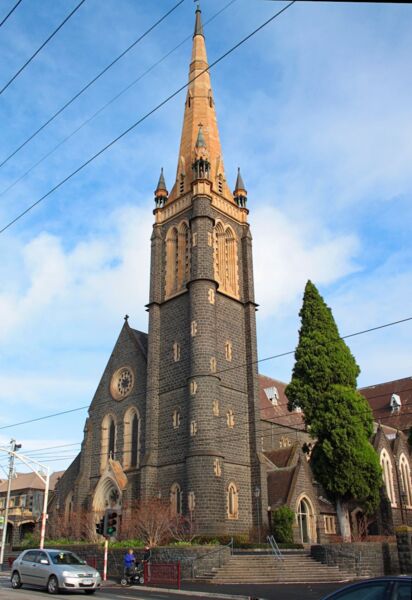 The church was designed by English born architect William Wardell who had already made a name for himself in England and was also responsible for many of Melbourne's most important early buildings including St Patrick's Cathedral. Like St Patrick's it is in the Gothic Revival style and constructed from local bluestone. The foundation stone was laid on 4 August 1867 by the first Archbishop of Sydney, Dr Polding, OSB.

In 1853 Fr Joseph Madden, who lived for a time in the home of Mr Joseph L'Estrange, chief clerk of the Crown Law Department took the first Mass in this house, which was named "Erindale" that the first Mass in Richmond was offered. "Erindale" was situated in a 9 acre paddock bound by Highett Street, Bromham Place and Ross Street.

A site of an acre and a half on Richmond Hill was purchased from a Dr Stewart for 2500.

Work on the foundations was completed in March 1868 and by 1869 the building of the body of the church began with the completion of the nave, aisles, and part of the tower taking place in 1870.

The Vicar General of the diocese, Very Reverend Dr Fitzpatrick assisted by deacon and subdeacon, first blessed the church along with 1,000 people, and then celebrated High Mass. Peter Lalor, the leader of the Eureka Rebellion, and by now a much more sedate Member of Parliament took up the collection.

The transept was completed in 1888 and the remainder, less the spire, in 1892. It was nearly 40 years later that the spire was completed. Designed by architect G.W. Vanheems, it was much taller than that originally proposed by Wardell. When completed in 1928 it was the tallest structure in Australia at 65 metres high.

On 26 April 1885, Archbishop Goold blessed the foundation stone of the transept. On 5 August 1888, the transept was opened by the Archbishop of Melbourne, Dr Carr. The cost of this section was 21000.

By 1892, after endless fundraising the church was completed except for its spire, bringing the total cost from the beginning to 42000.

The blessing of the completed church minus the spire took place on 4 March 1894. It was performed by Archbishop Carr, assisted by Bishop Reville OSA, Coadjutor Bishop of Sydney. Father Dalton, now 80 years old, was specially invited from Sydney to see the complete realization of the project he had begun 27 years earlier. The spire was completed around 1928 and cost 17400.