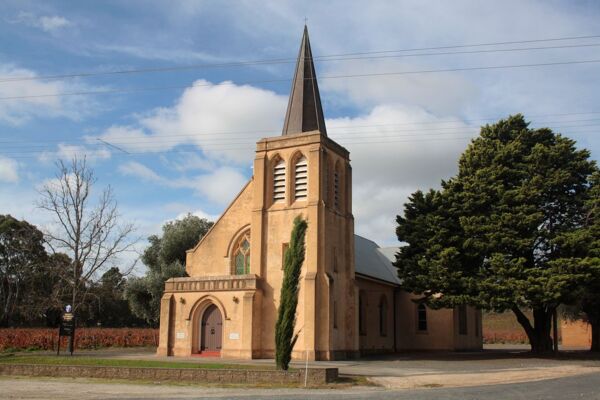 Trinity Lutheran established itself after the disastrous flooding of the Hoffnungsthal settlement in 1853.

In I855 the congregations of Holtnunesthal and Rosedale separated from Bethany. Around the same time the Hoffnungsthal members in the Rowland Flat area decided to form their own congregation.

J.G. Schulz a member of the congregation offered as a donation the piece of land where the church stands today. The foundation stone was laid on 14th May 1867. The dedication service took place on 25 August 1867. A porch and vestry were added later and a Saturday School was established in 1899.

A new Church was built in 1955 from a design by Mr S Chinney of Adelaide and the builder was Burley and Mader of Nuriootpa. The foundation stone was laid on 10 July 1955 by Pastor Georg. The cost was 15,000.00. A bell was donated by Messrs C and F Zerk and Mr and Mrs Liebich in 1937. A Wurlitzer reed electronic type organ was donated by Mr R.A. Gramp and his sister Miss O.R. Gramp in September 1960.