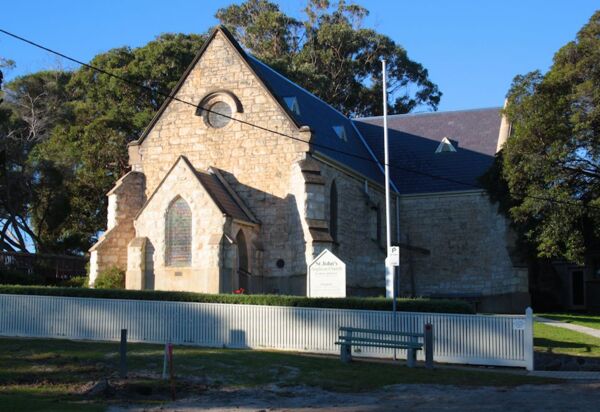 St John's Church of England, Nepean Highway, Sorrento, was commenced in 1874, the transepts being added in 1889 and the chancel during 1908-11. The small limestone Church is conventionally planned with an apsidal east end. Walls are of random coursed masonry with rendered parapet, buttress cappings and plinth (probably later) and a slate roof. The massive angled corner buttresses, porch, oculus and triangular roof vents are the principal features.

The church was completed at least in the nave section by 1874 and built by George Morce, and the building was immediately used for a number of community functions and was known as The Athenaeum in 'Guide to Sorrento' dated 1876.(2) Further research is required to establish the connection between this nomenclature and the title of the building in Ocean Beach Road.

The transepts were built in 1889, presumably also by Morce. The stained glass windows in the easterly transept were donated by St Paul's Anglican Church in Melbourne which was demolished in 1889.(3) The chancel was built in 1908-11 by William Croad, who also built Marlborough House, Cliff Crest The Sorrento Golf Clubrooms among other buildings.

The church is believed by some to have been positioned here near the school and the butcher's shop in the expectation that the town would develop to the west.

The windows include a small rose window with limestone surround at the porch end of the nave. There are four arched windows dedicated to various families in the nave section. The east transept features the triplet from St Paul's, Melbourne and the west transept another three window panels plus three in the sanctuary.

The stained glass windows include the work of Ferguson & Urie (from St Paul's Church, Melbourne) and William Montgomery.

The organ is believed to be of English origin and probably dates from the 1850s. There is no builder's plate. It was installed at St John's Church in 1924 by George Fincham & Sons.

This organ was replaced in September 2019 by a two-manual organ of nine speaking stops built in 1908 by the Christchurch, NZ organbuilder Nicholas T. Pearce. It is due to be consecrated in 2020*.