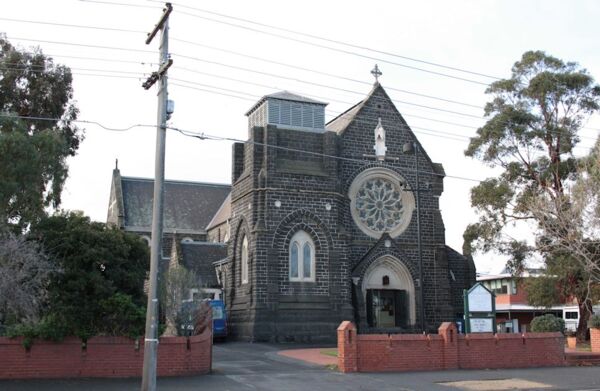 The area where this church stands was once known as Emerald Hill before becoming South Melbourne. Father John O'Connell was appointed to the charge of Emerald Hill and Sandridge in 1854 and this meant that Emerald Hill was the first strictly suburban Parish in the Diocese.

Built of bluestone and of Gothic style the Architect was TA Kelly and the construction of the Church was to be in three stages. The first phase, the nave and chancel, was built between 1869 and 1872. The contractors were Lilley and Brown, while the woodwork was crafted by a Mr. Woods. The second stage, consisting of the sanctuary and sacristies, were built in 1912-13. This increased the accommodation to 1,230. The third stage, the 130-foot spire and tower, is yet to be erected.

The foundation stone was laid by Dean Fitzpatrick, the Vicar General, on 7 November, 1869. The Church was opened in 1872.

Extensions to the church were planned in 1912 which would increase the accommodation of the Church to 1,230. In September, 1912, Archbishop Carr laid the foundation stone. The new extensions consisted of a sanctuary and sacristies, and they were officially opened and blessed by Archbishop Mannix in April, 1913. The plan for the 130-foot tower was left to a later generation.

Tiles for the Lady Chapel, chancel an on the passages and porches were supplied by Maw of England.

The church contains a matched set of stained glass by the German firm of FX Zettler. These windows were installed in the new chancel and transepts in 1932. F.X. Zettler and Co. was founded in Munich in 1870, and carried out many commissions in Catholic churches in Australia.

Renovations were carried out in 1970 under the stuardship of Fr Maurice Bernard Heriot costing $45,000.00. Changes included relocating the sanctuary at the crossing of the Church, turning the seats inwards to face the new timber altar and brining the old font into the original Sanctuary area. The interior was painted white. The Architect was Mr Paul Archibald.