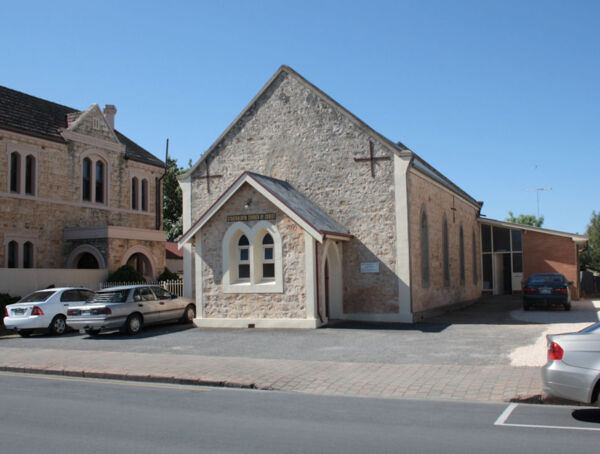 The founder of the Church was an English born, American trained evangelist called Henry S. Earl. He was a highly gifted preacher and preached his first sermon at Strathalbyn in the Colman's grain store on October 3rd 1869.

This resulted in an open air meeting on the banks of the Angus River. There were about 600 people in attendance and four people were baptized in the river.

On the 1st of November the Church of Christ was formed with the leading figures being two deacons, Mr. Alexander Gordon and Mr. Jephtha Good. The Church was established with the following declaration (quoted in part).

We, the undersigned Disciples of Christ' having confessed with the mouth our faith in the Lord Jesus have solemnly assembled on this the first day of November, 1869, at Strathalbyn, for the purpose of forming a Church of Christ. We do so with the sincere desire to honour and extol our divine redeemer. We are determined with the help of God to adorn the teaching of God our Saviour in all things, and shall attend constantly to the teaching of the apostles and the fellowship and the breaking of bread and the prayers, and daily live soberly and righteously, and Godly in this present age. ...Hence to the Word of God we look for instruction; to Christ's sacrifice and intercession we look for pardon and acceptance; and to Him as King we yield implicit obedience.

Alexander Gordon was born in Rosshire, Scotland in 1822 and came to South Australia with his wife and three children in 1854. He died on 5th September 1895.

Jephtha Good was born in Boston, Lincolnshire, England in 1830 and married at KirtoninHolland, Lincolnshire in June 1852, he arrived in South Australia in November 1852, settling at Belvidere, near Strathalbyn, moving to Alma in 1872.

The Chapel is a simple nave, built of random limestone with cement trim to a pointed arch window. The builder was R C Trenouth and the Mr Dick was the carpenter. The Church was opened on 30 March 1873. New vestry was added on 11 February 1939. Additions at rear were carried out between 1962 and 1963.

Daryll Telfer who supplied the clergy list and church history