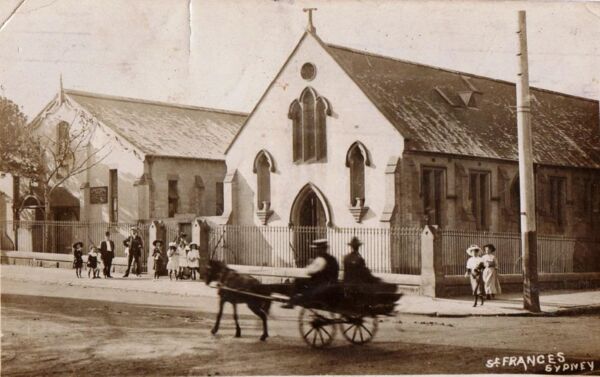 Believed to be the church of St Frances Church of Haymarket, but not the current one.

The building next door appears to have St Vincent de Paul Society sign on the wall (which would be linked with the Catholic church next door note the joining brick wall). People appear to be waiting to go into church, thus this would be a morning photo. If this is the case and judging by the shadows the buildings face north and the horse is therefore traveling west.

In the bottom right corner appears to be a tram rail (thus running north to south). Photographer faces NNE. The land appears to gently drain from the north east to the south west..

The photo takers were Irish Catholic from Botany / Glebe / Redfern /Erskinville area and was taken around 1905.