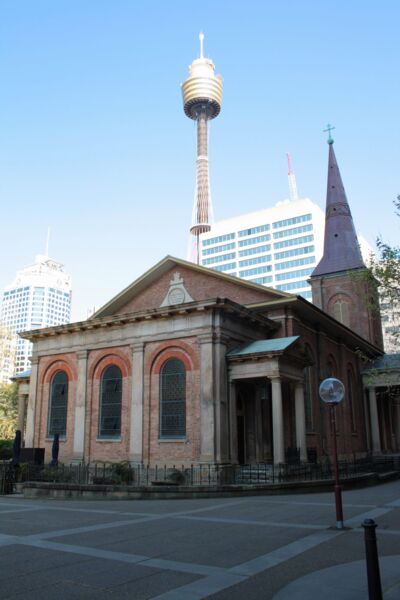 Of Georgian style the Church was constructed between 1819 and 1824 and is the oldest church building in the City. St James' is an example of the architectural work of the Macquarie period, completely designed and built by convict labour.

The Foundation stone was laid by Governor Macquarie on 7 October 1819 on a site originally chosen for Law Courts.

The Church was designed by the government architect, and former convict, Francis Greenway in the Old Colonial Regency style and was originally designed to serve as a courthouse. Set on a sandstone base, the building is of face brick with the walls articulated by brick piers.

The south portico was filled in before the building was completed and is now enclosed with glass. All of the entrances have slate steps with sandstone risers and are tiled with black and white marble. The square brick tower at the west end has a timber framed, candle snuffer spire, clad in sheet copper with chevron pattern, surmounted by a copper orb and cross. There is a peal of eight bells in the tower.

The Church was consecrated on 11 February 1824 by the Rev Samuel Marsden, using a form of service for non-Episcopal consecration, approved by the Archbishop of Canterbury. The first baptism was held on the same day.

The Church had major modifications and additions in 1824. The interior of the church was remodelled in 1900-1902 under the stewardship of J H Buckeridge. With the exception of the 19th century memorials, some timber panelling and the basic retention of the western gallery which were retained.

The church contains a rare collection of 19th century marble memorials, its painted Children's Chapel is unique in Australia and it includes amongst its collections and contents rare items of movable heritage.