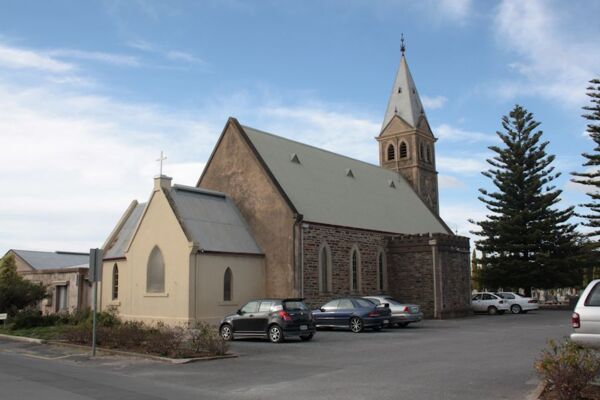 Langmeil Thanksgiving Congregation is one of the oldest Lutheran congregations in the country. Early services were held in the private homes of members and the congregation dedicated its first church on 26th December 1846. It was demolished in 1888.

Named after a village in Germany, Langmeil was settled by a group of German emigrants who came to South Australia in 1838 with Pastor Kavel. In 1842 they came to Langmeil, north of Tanunda, on the banks of the River Para. First church and rooms built 1846.

Constructed in bluestone with rendered quoins, strings and surrounds to openings, unbuttressed it is dominated by tower with unusual spire and characterised by large unadorned wall areas.

The desire for a new church commenced in 1868 and the contract was eventually let to J. Bastedow of Tanunda who undertook to erect masonry, roof and a ceiling for 595. The foundation stone was laid on 25 July and construction completed on 25 November. The debt on construction costs had been cleared by 1892.

The Cemetery contains the graves of Pastors Kavel, Auricht and Hebart, the first three Pastors of the Congregation. Two large shells brought from New Guinea indicate a row of graves of missionaries who served there.

The major part of the cost of the pipe organ was received as a bequest from a former organist Theo Geyer, who played in the church for 50 years. It was dedicated in his memory in 1950.
The piped organ was built J.E. Dodd and was installed in 1922 at a cost of 623. It was a two manual stop instrument.