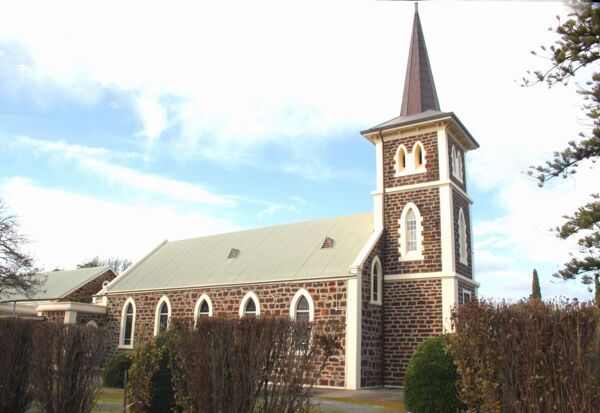 Due to a rift in Pastor Kavel's congregation, fifty-four members of the Langmeil Church formed their own congregation in 1860. They later bought and renovated a store which became Church and later manse. Present Church dedicated 1868.

Bells donated in 1887, the larger of which is still rung at sun down on Saturday evening. Also of interest are the life size figures of Christ, Peter, John, Paul and Moses donated in 1892.

Exterior typical in form of many South Australian Lutheran Churches of the nineteenth century, with symmetrical layout, central tower and simple Gothic style. Spire has unusual form which hints at its European origins and the stark interior suggests the simple nature of early Lutheran life. The principal facade to Jane Place, facing south, is dominated by the tower with blocked surrounds to openings of stucco. Unbuttressed walls constructed of random line pointed ironstone rubble are relieved by quoins, strings and surrounds to openings of simple stucco bands.

The organ was the first of a number to be supplied in the district by J.E. Dodd.