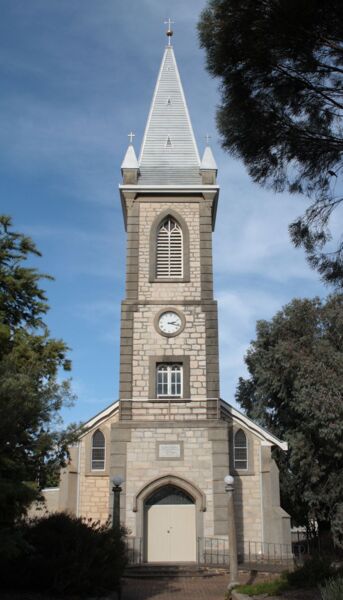 A number of pioneer families in the district organised the Free Evangelical Lutheran Tabor Congregation on 1 October 1850 under Dr Carl Muecke, Pastor, educator and journalist. The first Church was built in 1849, extended in 1871 and in 1910, and completely renovated in 1970. It has three bells in the tower, and an orb on top which contains congregational records.

The church was named Tabor after Mount Tabor, one of the most interesting and remarkable single mountains of Palestine. In 1870, the original Church was rebuilt. The tower and choir gallery were added in 1910. The belfry carries three bells imported from Apolda, Germany; Gloria (glory), Concordia (harmony) and Laetitia (joy). The largest bell weighs over 300kg.

The Church garden covers the graves of the congregations original cemetery. After complaints by neighbours about late night burials and the apparent smell it was moved in 1864.

In 1978 a Mr Ross Waters of Adelaide was commissioned to build an organ for the church.