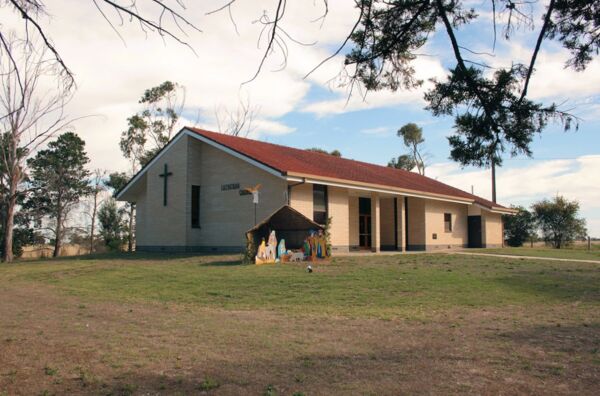 The present Lutheran congregation at Tintinara developed from two branches of Lutheranism.,

In 1960 several families tiled to the Evangelical Lutheran Church of Australia, (ELCA) commenced holding fortnightly services in the R.S L. Hall. In the following year they constituted themselves as a congregation with ten adults and their children. The congregation was served by Pastor J H Mattiske from Keith until his departure for N S W. in 1965.

When the two Lutheran churches amalgamated in 1966, the Lutheran Church of Australia was formed. The Tintinara Congregation was then constituted in July 1967 and became part of the newly formed Coonalpyn Parish, comprising the Congregations of Coonalpyn, Meningie and Tintinara.

By 1968 it was decided a church building was required. To raise funds members of the church with farms raised and sold cattle. Construction commenced in 1974 and the foundation stone was laid on 9 March 1975. Delays caused by a wall collapsing after strong winds and the fact the original builder could not complete the job meant the opening and dedication was held over until 11 April 1976. The estimated cost was $32,000.00.