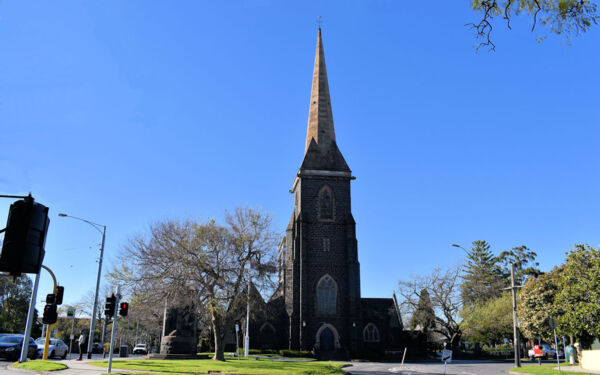 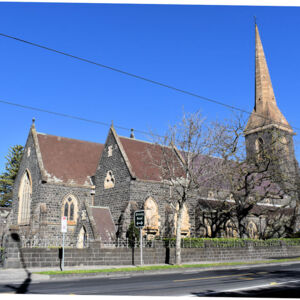 The first permanent Anglican Church to be erected in the area was, however, Christ Church South Yarra, the land for which was allotted in 1854 on the present site on the corners of Punt Rd and Toorak Rd. Residents of Toorak, including the Governor, initially travelled to Christ Church to attend church services, a distance of more than 2 kilometres for some. Towards the end of the 1850’s it was felt by many that Toorak had grown sufficiently to warrant the building of a church of its own.

A prominent bluestone church, designed by W W Wardell, built in various stages between 1860 and 1873, with the subsequent enlargement of the chancel in 1912 and the addition of the baptistry, vestries and chapel in 1920, 1935, and 1937, to the design of Walter Butler and Louis R Williams. This was Wardell's first Anglican design, carried out on an honorary basis, and gave rise to suspicion that he was unfairly trying to develop an Anglican practice.

A Foundation stone reads, " To the Glory of God to commemorate the completion on the thirteenth day of of July 1962 of the first one hundred years of worship here in the Church of St John the Evangelist this stone was set by his Excellency Lieut Gen. The Hon Sir Edmund Herring K.C.M.G. K.B.E. D.S.O. M.C. E.D. K.ST.I".

The first organ was installed in 1873 and constructed by organ makers Merklin-Schutze of Brussels. This organ was commissioned by the first vicar, the Revd Walter Fellows, and was originally located in the choir loft.

St John's has had a total of four pipe organs in its 135-year history. For a complete history on St John's various Organs click here.