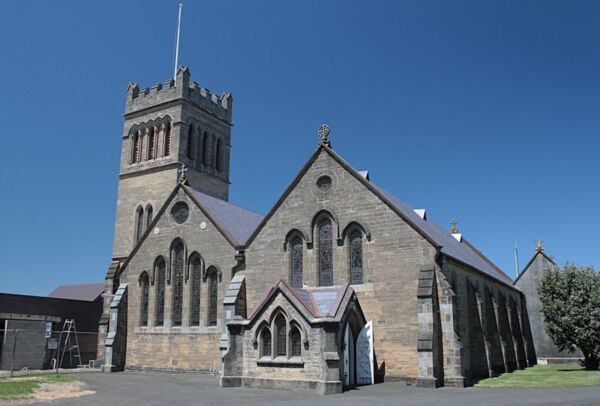 In July 1854 a group of parishioners, worshipping in a small brick building, made the decision to establish Christ Church - a church to seat 400. This original brick building was to become the rectory.

The first clergyman, Peter Teulon Beamish, a deacon. was appointed to Warrnambool in 1850 and was ordained as a priest in 1854. He found a small brick church which accommodated about thirty five persons. The outer shell of a parsonage house was erected in 1853 and used temporarily as a place of worship. This is now part of the Rectory.

The foundation stone of the present Christ Church was laid by Dr. Beamish on 26th. November, 1855 and this church of sandstone was opened at the end of 1856. The Church was built to the design of English-trained architect Nathaniel Billing, who had been a pupil of Gilbert Scott. Between 1861 and 1877 the north nave and porch were added with the tower and bells dedicated in 1882. So rapid was the growth of the township that it was soon necessary to add the northern section. This was done about 1860, by which time the population of the township had passed the 2,000 mark, and the completed church was dedicated by Bishop Perry in 1862.

A large cross, Celtic in design, stands near the church as a memorial to the fallen of World War 1.

The first pipe organ was built in 1868 by George Fincham. The instrument was sold in 1890 to Major Helpman at the Orderly Rooms, Warrnambool and in 1891 to the Congregational Church in Warrnambool.