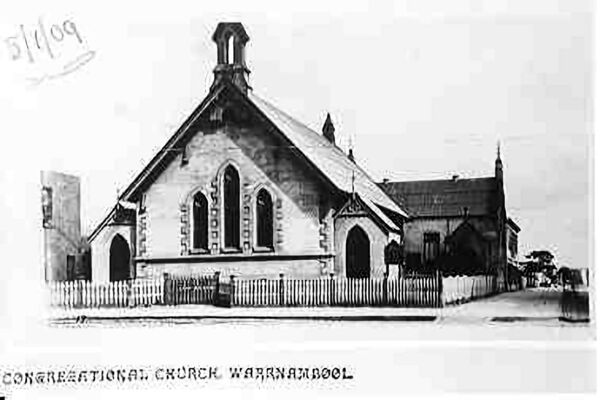 The Church began as the result of the meeting in a Timor Street Chemist's shop of two men of our Congregational persuasion, who discussed the possibility of forming a Church of the Independent order.

They were Mr Robert Winton and Mr. Thomas Nayler, who decided to call a meeting on 10th April, 1862, (as minutes of the meeting relate). "Having considered the advisability of raising an Independent Congregational Church, and circumstances occurring at Warrnambool favouring that opinion - Mr Thomas Nayler, senior, wrote to the Reverend Mr Lewis of Brighton, Secretary to the Congregational Union of Victoria, inquiring if they had any, and what means at their disposal for furnishing a minister for Warrnambool." Mr   Lewis replied that he viewed favourably their request, but warned of a shortage of ministers.

On 8th June, Reverend J L Poore, representing the Congregational Union of visited Warrnambool, conducting services that Sunday and on 9th June presided at a public meeting held in the Temperance Hall, then a small building situated in Liebig Street. The meeting resulted in the formation of a provisional committee.

The Past of our Future, A history of the Warrnambool Uniting Church. Barry T Brown and others.