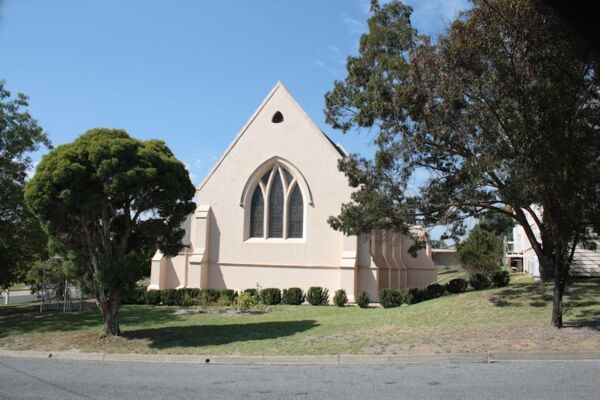 Originally all denominations in this beautiful farming community met for worship in a wooden building which served as both Church and Parsonage. Though intended for all those of protestant evangelical persuasion the first preacher in 1857 was Mr Ashe and Anglican lay preacher.

A Mrs L Kerr came to the rescue of the Anglicans to build the English church as it is called to this day. Mrs Kerr's efforts resulted in a fund of £600 plus a further £200 for essential furnishings and so arrangements were made and the foundation stone was laid by the same good lady on 10 March 1868.

A cement-faced Gothic church of three bays designed by Albert Purchase and opened in 1868, with the addition of a sanctuary and vestry in 1907.

A Casson pipe organ built c 1900 by the Positive Organ Company, London, opus 168, and one of two Positive organs in Victoria, the other being at St Andrew's Anglican Church, Aberfeldie. The organ was installed in St James' Anglican Church, Thornbury in 1917 and moved to The Organ Centre, North Caulfield in 1969. From 1975 to 1982 it was placed in John Maidment's residence in Canterbury and in the latter year it was installed at Yea.

A full description and photos can be seen here.