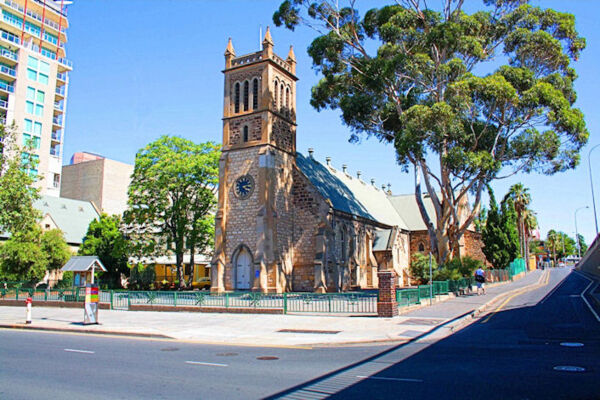 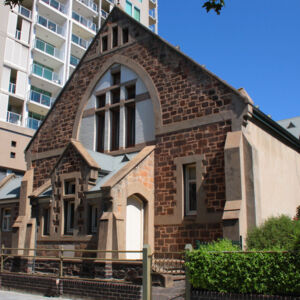 This is the first church in South Australia. The original structure was built 1838, rebuilt and enlarged 1844-45 rebuilt again in 1888 (raised tower and extensions E J Woods arch; only the lower parts of the present nave and tower date from 1838. The clock was made in 1836 for South Australia by Vulliamy, clockmaker to King William IV. The church includes the William IV Window, supposed to be the earliest window in South Australia, having been brought out in 1836 with the prefabricated structure.

Over the course of its 176-year existence, Holy Trinity Church has been rebuilt a number of times, with the last major construction/renovation episode occurring between 1888 and 1889.

The Church was rebuilt in 1845, and significantly extended in 1888-9, when it was transformed to its existing Victorian Gothic style. Pointed windows were installed, a pitched roof with fine timber trusses replaced the original flat roof, supported by masonry buttresses and higher walls, while the tower was extended to its present height.

The Grenfell Memorial Organ, has been built in the upper section of the north transept.  It is a fine instrument of twenty-three stops and 1,299 pipes in memory of Pascoe St Leger Grenfell, who gave the land on which the church is built. The instrument was dedicated on 2 February 1958, marking the 118th anniversary of the church.  The Centenary Window, installed in 1937, commemorates the first 100 years of Holy Trinity Church in three panels of stained glass.