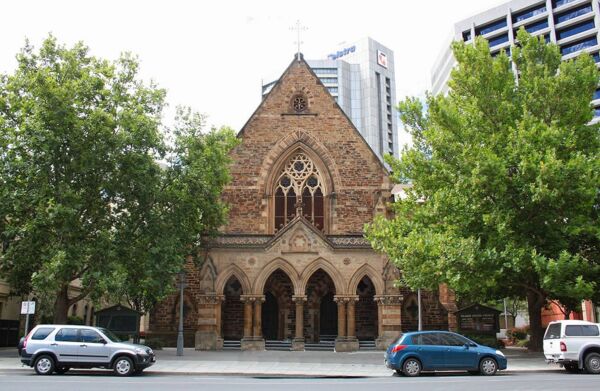 Pilgrim Church traces its roots back to Adelaides early Wesleyans and Congregationalists. A Wesleyan chapel in Pirie Street was opened in 1851 and became known as the Pirie Street Methodist Church. Stow Memorial Congregational Church, in Flinders Street, was dedicated in 1867. The two churches were back-to-back and were divided by a high stone wall with a locked gate.

Construction commenced in 1865 and the building was opened on 12 April 1867. The Architect was Robert George Thomas and the builders were Brown and Thompson. This church was established on 1 June 1969 out of the Stow Memorial and the Pirie Street Methodist churches.

Builders were English and Brown. The stone carving at the entrance is by S Peters who was brought from Sydney. An item of interest is the medieval gargoyle squirrel in the central pillar. The church was built of Glen Osmond stone finished with cut freestone from Glen Ewin.