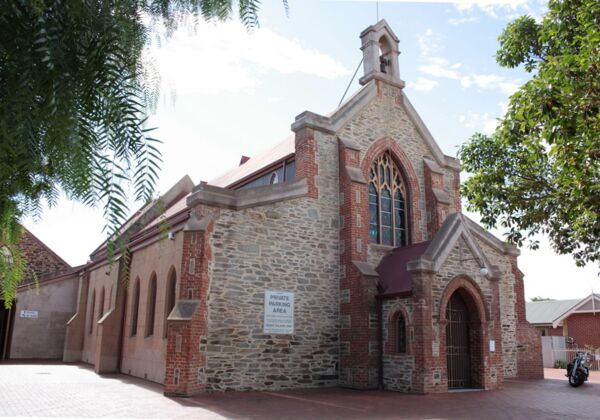 Divine Service appears to have been first conducted in a Schoolroom in Hobson's Place, between Sturt and Wright Streets. In December, 181-)3, a meeting was held in Hole Trinity Schoolroom, presided over by Ir. Justice Cooper, when it was reported that a sum of 120 had been subscribed for the purpose of erecting a Church in the south-west portion of the City. *

A Grain store in Wright Street was made available until such time as the new Church was completed. It was suggested that the site of the Church should be nearer to the centre of the Cite, in either Wright or Gouger Streets, but eventually' it was decided to build on the Whitmore Square site, this land was given by the Society for the Propagation of the Gospel in Foreign parts.*

In April, 1854, a meeting of the subscribers was held. At this meeting a letter was read from the Bishop, stating that owing to the price an iron Church would cost 1 - 2,000 (exclusive of expenses), he thought it inexpedient to purchase such a Church and advised against doing so. Special meetings were then held and it was decided to proceed with a stone one, and Mr E. Wright was appointed Architect.*

The Iron Church was condemned.

The Foundation stone was laid on September 11th, 1855 by the Governor. Amongst those present was the Bishop and Rev. J. Pollitt. The Church was consecrated on February 14th of 1856.

The Church was destroyed by fire in 1992 and re built.