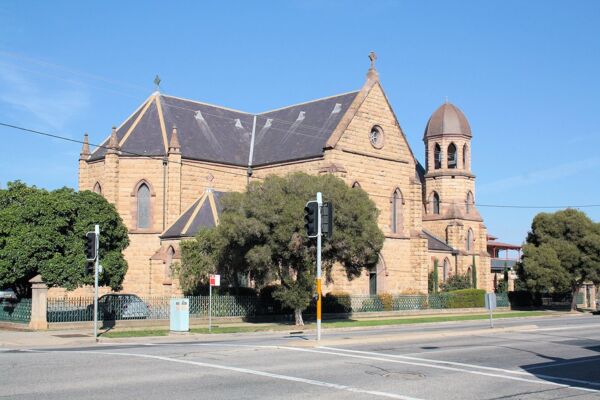 Father Charles Lovat, a pioneer priest from Yass, celebrated Albury's first Catholic mass on November 25, 1843 in a much smaller building at a different location. The present Church was opened on November 24, 1872. The priest who planned its construction was buried behind the altar. He was Dr. Michael McAlroy, Albury's parish priest from 1868 to his death in 1880.

Dr. McAlroy built the church when Albury had a population of around 2600. The Foundation stone was laid on 21 August 1870 by Dr McAlroy assisted by Father William Bermingham.

The church was designed by John Gordon in the Gothic style and constructed from brickwork faced in local granite. Gordon was born in Chelsea, London around 1826 and emigrated to Australia around 1853, practising in both Goulburn and Albury and district until his death in 1880. The building was not completed to Gordon's original designs, that envisaged a longer nave and a tall tower. The unusual octagonal cupola roof to the tower was not part of Gordon's design.

The first pipe organ was built in 1892 by Fincham & Hobday at a cost of 750 and had two manuals, 18 speaking stops and 3 couplers. All the fittings inside the tambour are of handsome French polished Tasmanian blackwood. The pedal keys are on the radiating concave principle, & of Tasmanian blackwood.

The present organ has its origins in an instrument built in 1935 by Frederick Taylor, of Hawthorn, for the Baptist Church Coburg, Victoria. This was rebuilt in 1962 by Davis & Laurie, who electrified the action. In 1982 Australian Pipe Organs built a new instrument incorporating parts from the Taylor organ and a 1922 organ by George Fincham & Sons formerly in the Peace Memorial Methodist Church, Epping Street, East Malvern, Victoria. Further work was carried out by Wakeley Pipe Organs Pty Ltd in 2002.

1. Servants of God. An Abridged history of the first Centuary of the Catholic Church in the Parish of Albury
2. St Patrick's Church Albury 1872 - 1997 by Howard C Jones
3. Australian Dictionary of Biography