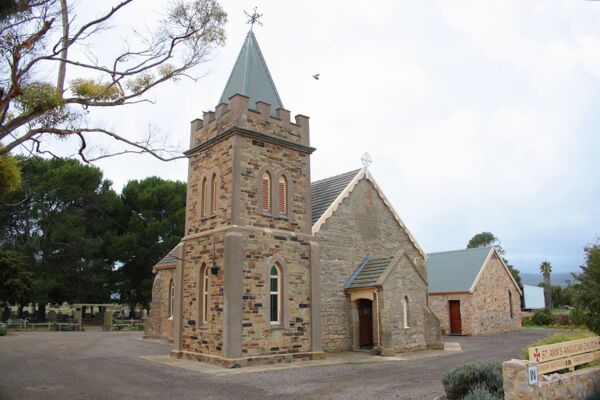 In 1866 residents of Aldinga called a meeting to consider the advisability of erecting a Church. An acre of land was presented by the South Australian Company and the foundation stone was laid by Mrs Short. Total cost was £785. Building opened for service by Dean Farrell and was consecrated.

The Church is a simple stone chapel derived from English parish churches of Gothic style, and the later tower continues this idiom, with pointed arched windows and a crenellated parapet. The Church was designed by notable Adelaide architects Wright & Woods. The tower and spire were designed by architects English & Soward and built during 1911.*

In 1948 the Rector closed the church due to lack of numbers but in 1954 it was reopened and restored. The walls and interior were all re painted.

The hall was commenced in 1988 when the ladies guild said they needed a place to boil a kettle. Stones were collected through rock picking picnics. The foundation stone was laid on 30 April 2000.