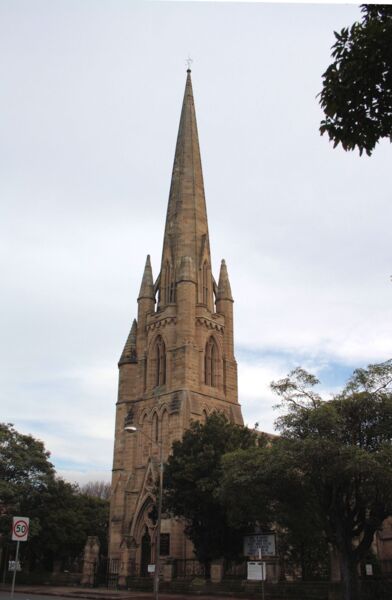 Built between 1886 and 1889 and opened in February 1889 the church was a gift by Mrs Helen Hunter Baillie as a memorial to her husband John Baillie who died in 1854. He was a sub-editor of the Colonial Observer and later the Secretary and Inspector of the Bank of New South Wales.

The Church was constructed in the early English Gothic style. The spire is 60 metres above street level while the interior contains pillars of Scottish granite and Melbourne bluestone.

Much of the timber is Australian red cedar whilst the pulpit is superbly carved Oamaru stone from New Zealand, with green marble columns and base.

Hill & Son 1890. Its case, designed by Dr A.G. Hill, is reminiscent of the firms' design for Chichester Cathedral, from 1888 and incorporates burnished tin faade pipes. Built in 1890 at a cost of 850, the organ was opened on 29 May 1892 by Sydney City Organist, Auguste Wiegand.