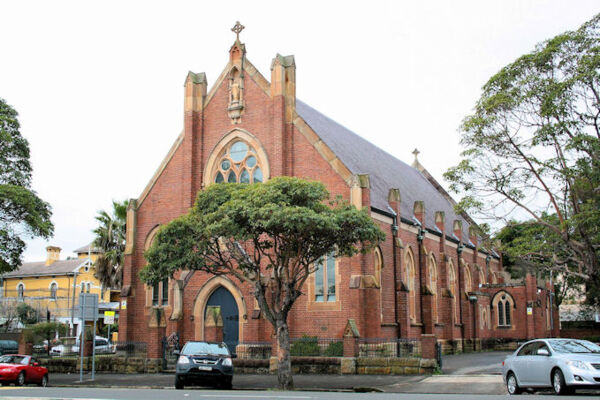 The first congregation of the newly established parish met for Mass in the Council Chambers on Sunday 6 March 1898. There were about fifty people present.*

A block of land at the corner of Trafalgar and Johnson Streets was purchased and it was proposed to build a church school and convent. The Architect was Joseph Sheerin. The Church was of Gothic style, 100ft long by 41ft wide and from the floor to the roof 50ft.*

In October 1905 Father Rohan was able to purchase the block of land at the corner of Johnson and Collins Streets with a building included which was to become the convent.*

The Foundation stone of today's church was laid on 11 August 1912 by the Most Reverend Dr Kelly Archbishop of Sydney. The Church was opened on 1 June 1913 by Archbishop Kelly.*

The altar of the church was hand carved in dark Oak. The high alter at first had only one spire. Three years later two smaller spires were added.*