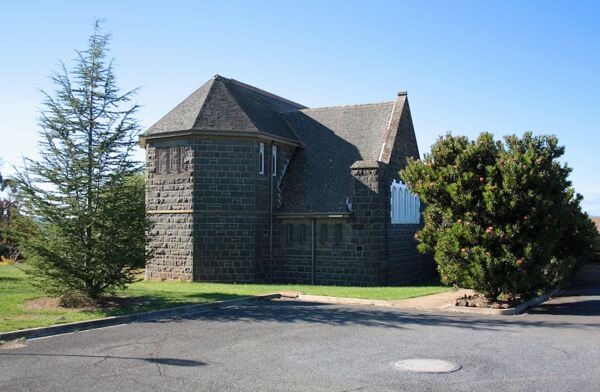 In September 1863 the Rev'd Homan wrote to the Diocesan Architect to furnish plans for a Church capable of seating 300 people and costing about 2500 with chancel and tower or 1500 without chancel and tower.

The foundation stone was laid in November 1863 by Archdeacon Braim of Portland but it was not until 21st October 1866 that the Church was opened and dedicated by the Venerable Theodore Stretch, Archdeacon of Geelong. The Church was finally consecrated on the 16th April 1882 by the Right Rev'd James Moorhouse, Bishop of Melbourne acting for the Bishop of Ballarat (Samuel Thornton) who was absent.

The foundation stone for a new Sunday School was laid. The building cost 570. The building was opened by the Ven Archdeacon Arthur Green on April 29th 1891.

In January 1940 Holy Trinity Church was gutted by fire and within half a hour the roof collapsed and the building was ruined.

After years of planning the plans for the Narthex were completed in 1984. The narthex was built and blessed by Bishop John Hazlewood on 14th July 1985.

In 1951 there was a pipe organ with choir stalls. It was eventually sold and an electric organ took its place. In April 1961 a new electric organ (Wurlitzer organ and amplifier) was installed. This organ broke down in November 1979. In 1993 it was decided to buy a pipe organ from Goodwood Uniting Church, Adelaide for $10,000. The pipe organ was built by George Fincham and Sons in 1960 and was installed the following year.