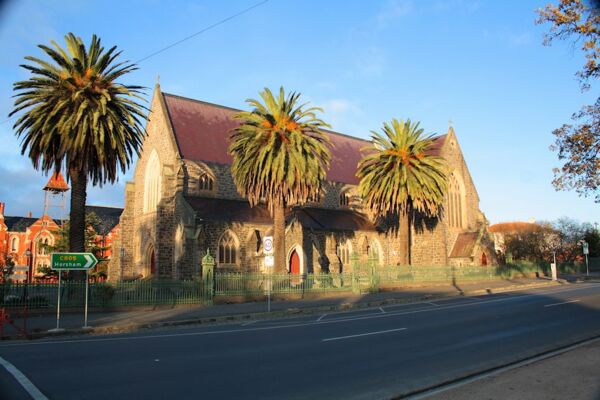 Although Catholic Services were conducted in Ballarat from 1851 onwards, the parish of Ballarat was not instituted until 1852. The first Parish Priest was Father Matthew Downing, who in 1853, selected the two acre site for the church, which was granted under a Crown Grant in 1855. The style of the church is early Gothic from the era of Edward the 1st in the 13th Century.

The Foundation stone was lad on February 7, 1858, by Bishop James Goold laid and regular services commence in 1863. The miners presented the Bishop with gold nuggets which were formed into a Chalice and Paten, found today in the Victoria and Albert Museum, London. With this exception all the presentation plate is still held by the Diocese.

In 1887, a High Altar, which can be seen still today, and Stations of the Cross were purchased from Rome. The altar is of Carrara marble inlaid with precious stones including Antico Rossi, Lapis Lazuli and antique marbles. The tiles of the Sanctuary and side chapels are from Austria and those in the nave from Minton's England.

The stained glass windows were introduced in 1883, the first being that in the Sanctuary. Following this were the Lady Chapel window and Blessed Sacrament Chapel window. These three windows were made in Germany and a slight variation in colour to the other windows can be noticed. The remaining windows were gradually added to, until the final one in 1910. Of these, the first was presented by the Loreto Sisters representing St Brigid (note her Crozier, the traditional mark of a Bishop). On the opposite side of the narthex is St Patrick's window, donated by the third Bishop, Bishop Higgins (note the crozier piercing Aengus through the foot). Both these windows have the Holy Spirit uppermost. The side windows depict the parables.

An extensive renovation and liturgical upgrade of the Cathedral took place in 1999. Highlights of this were the installation of a new altar, tabernacle and baptismal space. Also of note was the discovery of the original paint colours around the sanctuary, which have been conserved in the renovation. The new altar, given by the Archdiocese of Melbourne, was consecrated by Cardinal George Pell on April 26, 2000.

Five of Ballarat's seven Bishop's are buried in the crypt, which is in the northern transcept.