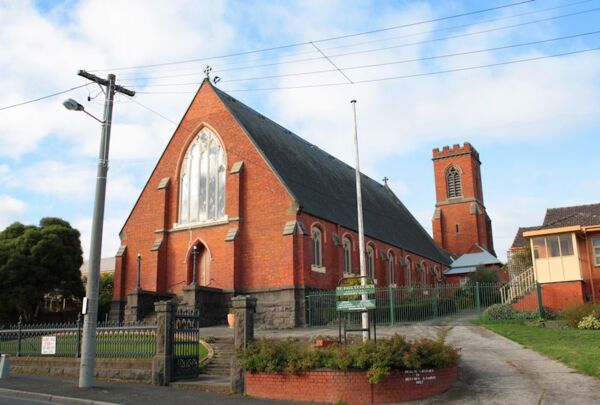 St Paul's is closely associated with the early Ballarat goldfields and mining at Bakery Hill. It features a plain exterior that hides an unusual internal structural timber post and truss system, extensive and intact 1860s stencilled decoration, and a magnificent and very early stained glass window.

The congregation of St Paul's was formed at Bakery Hill in 1854, three years after the discovery of gold in Ballarat. Following an earlier temporary tent structure, the first brick church was constructed on the site in 1858 when the Parish of St Paul's was established. In 1864 the first church collapsed when the ground of Bakery Hill, weakened by mining tunnels, subsided after rain.

The church is a red brick Victorian Transitional Decorated and Perpendicular Gothic Revival church constructed in 1864 to a design by Victorian architect Leonard Terry. It incorporates a number of elements from an earlier church on the site. These include the large square castellated tower, the Ferguson and Urie triple chancel window and internal timber members. The church comprises a gabled nave with gabled chancel and porch, a timber mezzanine gallery, square tower and a vestry, added in 1892.

The chancel window was created in 1862 by leading stained glass makers Ferguson and Urie. It was removed and positioned in the chancel of the new church in 1864-65. This window is amongst the earliest surviving examples of ecclesiastical stained glass windows in Victoria. The window is a 14th century design, with grisaille pattern, the details taken from natural flowers and leaves.

The organ has an interesting history. In 1858, the church had a Seraphine and a Harmonium. A new pipe organ was in transit from England when the first Church collapsed in 1864. However, it was decided that the organ should be installed in the new church.

In 1865, the London-built J.W. Walker & Sons pipe organ was installed. The organ was originally built in 1864 by J.W. Walker of London and enlarged in 1892 by Fincham and Hobday, and rebuilt in 1957 by George Fincham and Sons. The instrument retains its original case, diapered (diamond patterned) faade, pipework and tonal scheme.