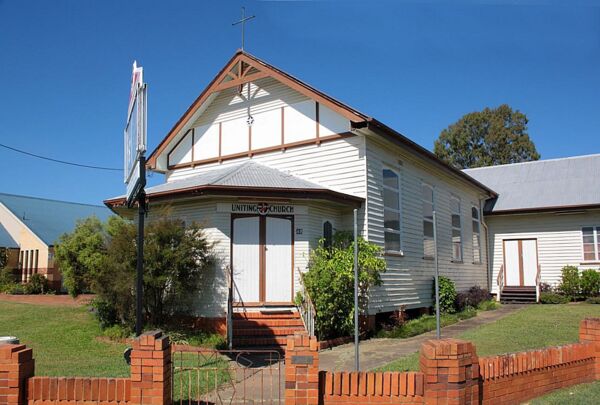 Ministry of the Methodist/Uniting Church has operated in Beaudesert since regular church services commenced in January 1908. A Mr. Moorhouse conducted services occasionally in the town of Beaudesert. Those services were held in the home of Mr. & Mrs. S.R. LeGrand. In 1907 there were three names on the Methodist Members Roll for Beaudesert. Viz: Sydney R. LeGrand, Mary Jane LeGrand and Bro. Moxon.

In 1908 a tender to build the first church submitted by Mr C.A. Thams for £60 was accepted and the building was completed in August.

The church was officially opened by Rev. Dr. II. Youngman on Saturday the 5th of September 1908. It rained heavily on the day. A great crowd was expected and prepared for so there was great disappointment when only 50 people attended. Among those who attended were Rev. H. Saunders (Baptist). Capt. Jones (Salvation Army) and two Methodist Ministers the Rev. J. Fox and the Rev. J. Whitney. Rev. Dr. Youngman. Rev. Denny and Mr. S. LeGrand addressed the gathering.

1. Faith of Our Fathers. 100 years of worship in the Beaudesert Methodist and Uniting Church. June Todd 287.93 TOD