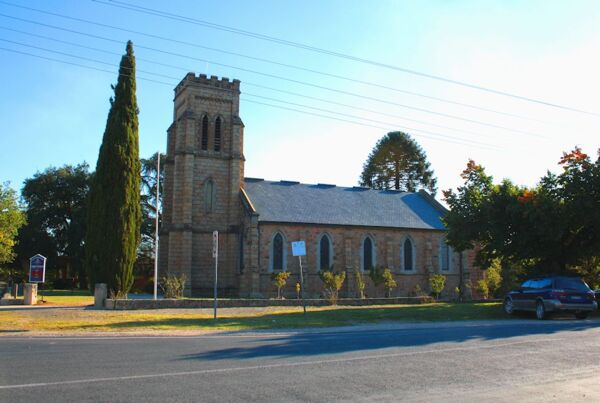 The first Rector was The Reverend Cooper Searle and a rectory was built for him in 1855. At the time the present church hall was the first church building. The Victorian Government provided two-thirds of the building costs for the current church.

The Church was erected in two stages. The foundation stone for the first stage, comprising the nave, was laid in 1858; the contractors were Stevens and Balfour. The tower and chancel were added in 1864. Built of local granite, the church is dominated by the square tower centrally located at the west end. Pairs of buttresses express each corner of the tower and it is crowned by a castellated parapet. The architect was Leonard Terry.

In the beginning, the parish of Beechworth included Myrtleford and Eldorado and gave its name to the Archdeconary of Beechworth. In 1901 when the Dioeces of Wangaratta was formed, there was serious consideration given to the making of Beechworth the Cathedral. This was finally rejected in favour of Wangaratta owing to the fact that the later town (now a city) was more centrally situated.

From the early 1860's the parish priest acted as chaplain to the Beechworth gaol He also became chaplain to the Mental Hospital. In 1868 this was firmly established and so the parish only had to find 250 of the 350 due to the Rector. The numbers of people appearing in the congregation never seemed to be very great and 10 and 20 at each service was the average.

In 1901 when the A pipe organ, built by the Melbourne organ builder, William Anderson, was installed in the church in 1887, believed to have been originally installed in St. George Roman Catholic Church in Carlton in 1882. It is a single manual organ of eight speaking stops, which retains its original action, console, pipe work and case containing dummy wooden pipes. A complete restoration was completed in 2008.