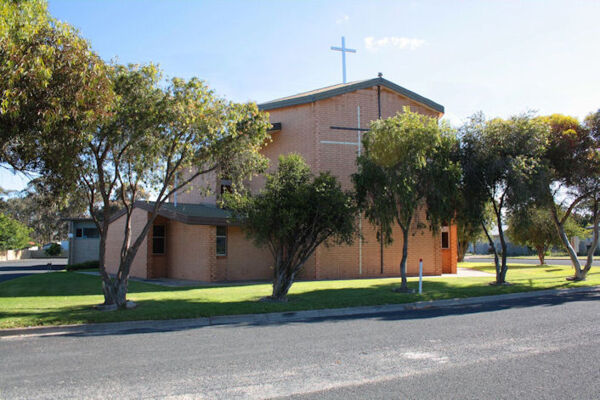 The beginnings of the church fall to the Hausler family who moved into the district in 1930. With no Lutheran church to speak of they encouraged the Victorian district of the UELCA to conduct services on a regular basis. Pastor E Sprengel of Mt Gambier conducted the first three services in the Hauser home which was located about 8 miles south of the town. In the mid 1940's services were held in various private homes including those of Mr and Mrs Weckert.

In 1937 the congregation was formed under the leadership of Pastor Fritach. Towards the end of the 1940's a block of land was purchased.

The two arms of the Lutheran church in Bordertown agreed to form a joint committee to build a common church. The church was to measure 48' x 24' with an entrance porch and two small rooms near the sanctuary. The cost was 3,000. The Foundation stone was laid on 4 October 1953 and now resides in the windlock of the church.

The church was opened and dedicated on 3 January 1954. The Church was to be used on alternate Sundays by each congregation.

In the early 1970's it was realised that the current church was too small and discussions were held to consider building a new church. By 1976 a sketch had been made of a proposed new church and by 1976 $34,000 had been raised. The first sod was turned on 10 April 1977 and the foundation stone was laid on 28 August of the same year. The new church was opened on 8 October 1978.