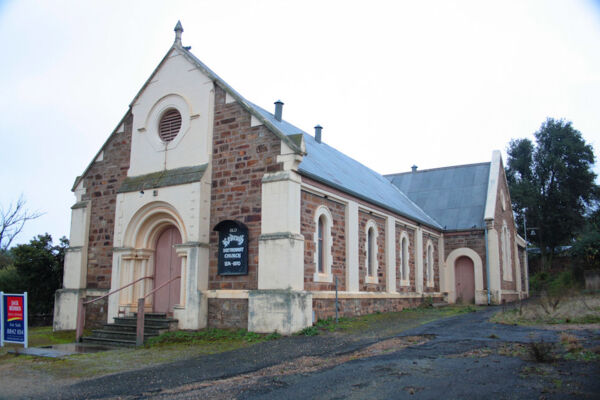 Redruth first appeared in the quarterly minute book on 24 June 1851. No members are listed and the income was 5/4. Three months later there were 4 members and the circuit income was 1-6-6. In February 1851 the Kooringa trustees had begun to build a church opposite the police station and 1-17-10 was collected at the laying of the corner stone. The church cost 228. 98 was raised by subscription and the Government gave 130. Soon almost all the men went to the Victorian gold fields and for a while services continued for the women and children, but in 1854 the church was dismantled and the roof, floor, windows, doors, pulpit and seats were used for the Spring Farm Church in the Clare District. Redruth disappeared from the Burra Circuit.

In 1857 the Kooringa trustees restored the Redruth Church. Their own church had been enlarged and they utilised the old windows, pulpit and part of the roof in the new church at Redruth. 20 was raised and 130 borrowed at 10%. By 1863 the debt stood at 108. In 1865 40 was spent on renovation and in 1874 the debt was 84. In that year the present church was erected.

The Church was opened in 1874. The Nave was built in 1874 and what is now the Transept was added the following year for the Sunday School. The Vestry was added in 1883.

The Church was closed in 1970 when it was decided to amalgamate the Redruth and the Kooringa congregations to The Kooringa Methodist Church. Prior to it being sold by the Uniting Church of Australia in the early 2000's it was part of the Youth Camp and Conference Centre that encompassed the Church, the Sunday School next door and the Courthouse Hotel across the road.