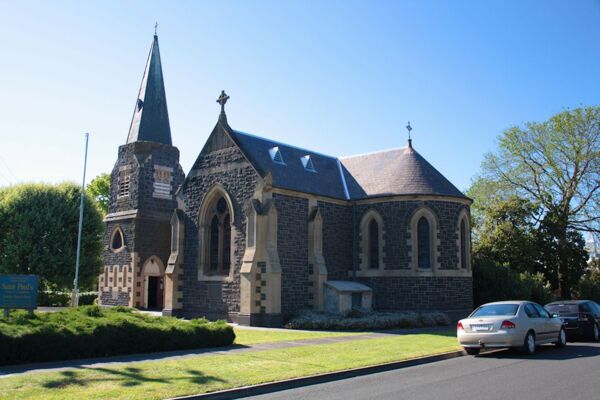 The building of St Paul's Parish Church commenced in 1863 with substantial contributions from families whose descendants still worship in the parish. With local tradesmen directing the stonework and carpentry, both the church and the vicarage were completed within four months.

The Church was built in three stages with chancel and sanctuary, and transepts and bell tower added later. In 1894 a vestry and Lady Chapel were added. Architecturally it is a mixture of styles, including Norman and Gothic.

Both the church and the vicarage are built in bluestone with Welsh slate roofs. The church features sandstone surrounds for the doors and windows. The pulpit and font are cut from the same sandstone. The original pews and choir stalls are still in use, however, in 1989 the floor was replaced and carpeted, and heating installed.

From 1888, stained glass windows have been a feature. The great west window is in memory of Peter and Thomas John Manifold. A Memorial Garden is established in the grounds.