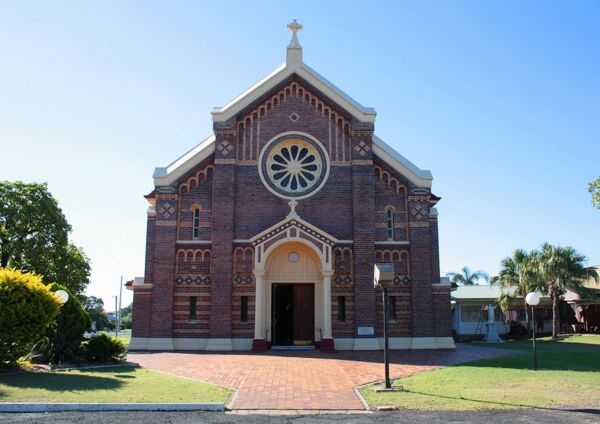 Construction was begun in 1865 on the first Church using local clay for bricks, sourced from the creek's banks. not far from the site of the church. In October 1865, the Dalby Herald reported that construction of the church was "progressing favourably, the brick walls now having attained considerable altitude." However, with the desire to get the job completed, there were going to be some modifications to the carpentry, which would be less ornate than originally planned.

But on the 9th of December, a fierce storm struck the Downs, and Dalby bore the brunt of it.The gable wall (the front wall with a triangular shape) of St Joseph's, still under construction, was blown down. The following March, Mr Kilpatrick was awarded the tender to demolish what was remaining of the church, and to commence a rebuild. Mr Jones was awarded the carpentry contract. Mr Burke was the architect.

The Foundation stone of the current Church was laid on 16 May 1920 by the Most Reverend J. Duhig Archbishop of Brisbane. The Church was dedicated on 4 December 1921.

The Foundation stone was laid on 16 May 1920 by the Most Reverend J. Duhig Archbishop of Brisbane. The Church was dedicated on 4 December 1921.