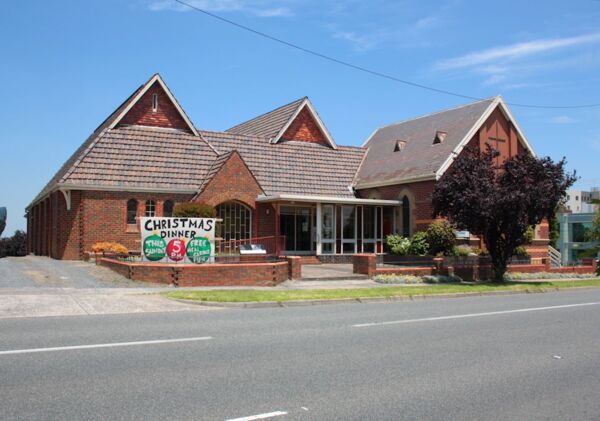 The first service was held in the home of Thomas Porter senr on Sunday August 30 1863. In addition to the meetings at the Porter home, gospel services were held in the Chapel owned by the Baptists who had discontinued meetings. The Church commenced in 1863 and by 1864 a small weatherboard chapel was built on the present site. In 1889 a brick chapel was opened.

Meanwhile during 1888 - 1889, there was rising interest in a new building project, and by June, 1888, over £500 had been promised, so that a meeting on July 19 was encouraged to decide "that the rising importance of the township and the probable increase of inhabitants justify the church in going to the expense of a building costing about £1,000, of a style in keeping with that of the State School opposite."

Six months later, more cautious counsels prevailed, and it was decided to spend only £600, removing the old weatherboard building to the rear of the new brick chapel to serve as vestry and schoolroom. Later still, the dimensions of the new chapel were fixed at 26 ft. x 30 ft., and the actual building was begun.

For a time, services were held in the State School (at a rental of 5/- per week) until the new chapel was opened with special services on October 8 and 10, 1889.

In July 1953, the important decision was made to favour the building of a new chapel. Several alternative proposals were discussed over the next couple of years, but intensive work by church officers, trustees, building, and finance committees resulted in the acceptance of a plan bv Joseph Smith (architect), the beginning. of operations by the builder R. J. Grills), and the laying of the foundation stone on August 26, 1956, by the former church secretary, Thomas Petty.

1. Rev Simon Clemow for extract from Doncaster Church of Christ 150 years of Faith Hope and Love