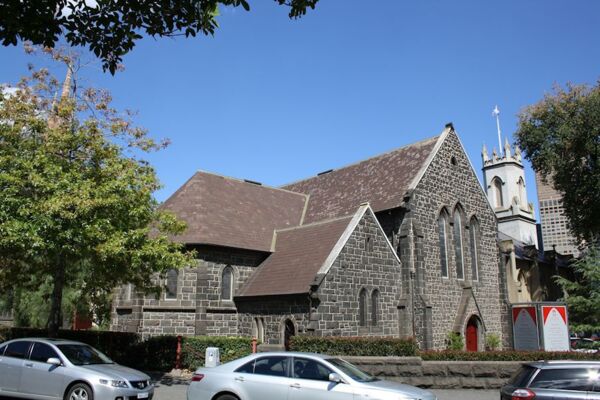 In September and October 1843 the Bishop of Australia, Dr William Grant Broughton visited Port Phillip and suggested there should be a second Anglican church in Melbourne. The foundation stone was laid on 18 June 1846 by the Superintendent of the settlement, Charles Joseph La Trobe. Dr Broughton had hoped to be present for the occasion but he supplied the words which Governor La Trobe used when laying the stone.

The Government of the time promised a grant of 1,000 and the Bishop of Australia gave 500 from funds at his disposal from England.

Of Gothic style the architect was Charles Laing, whose stuccoed nave and tower were built from bricks which had come from England as ballast in sailing ships. Although still uncompleted, the church was temporarily opened for worship in 1847 and Frances Perry, the wife of the first Bishop of Melbourne writing home soon after their arrival, The first part of the building was constructed between June 18, 1846 and February 1848.

Bluestone transepts with seating in galleries as well as at ground level were added, bringing the numbers that it could hold from 650 to 1050 in 1864. Stained glass by Ferguson & Urie in 1876 and later windows in transepts were by Napier Waller 1946-49. Joinery, Furniture & Fittings made by Selleys of London in 1854, lectern carved by Robert Prenzel. A final extension at the east end of the church was completed in 1876

As an aside pew rent books were common in the 1850's and many worshippers of more limited means worshipped at the Church and these contain many entries from residents of Royal Terrace in Nicholson Street, built in 1854 as one of the most substantial terraces in the city and still standing on its site across the road from the Exhibition Building. Several institutions also rented pews at St Peter's, including the Melbourne Club, and nearby schools. Pew rents continued at St Peter's until the last decade of the 19th century.

The first organ was built by John Smith & Sons, of Bristol, England. It was erected in 1855 by Henry Smith, from the Bristol firm, who was at the time resident in Melbourne. It remained in the Church until 1912 and was then sold to St Paul's Anglican Church, Geelong.
The second organ was built in 1912 by Norman & Beard, Norwich, broken up in 1969-72. It was the firm's job number 1167 and cost 1,235.