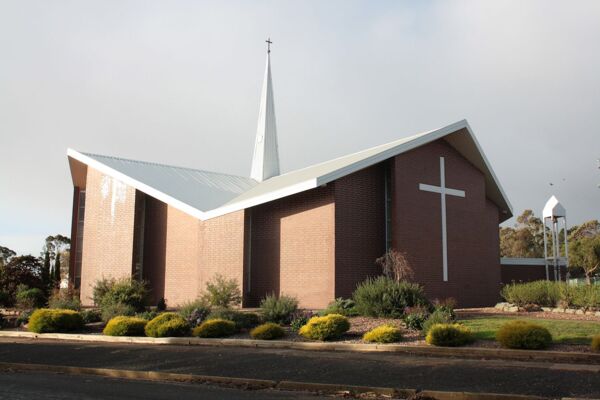 A congregation was formed at Emmaus in 1870 by Pastor E.D. Appelt of the Nain-Gnadenberg Parish. The first service was held in the home of Mr. C. Ziersch. A church was built in 1872 at Emmaus during the ministry of Pastor R. Ey and an adjoining school was also built.

Eudunda, which had originated with a wine store on busy cross roads in 1870, had grown to an expanding township. As many of the members of the "Emmaus" Congregation lived in or near Eudunda, it was decided to build a new church in Hannan Street. The church was built in 1884 at a cost of $2,200. The bell was donated by Pastor Georg's wife, Maria.

In 1976 the Church Building Committee began to inspect other churches listing points in favour and against each building. This committee met the architect, Mr. N. Drogemuller, who listed the requirements and agreed to submit a sketch plan for the new church.

Building plans were approved for a brick and steel constructed new church in 1979, and Drogemuller, Pudney & Associates were appointed as architects. The builder was C O Juncken Pty Ltd. The new church was built on the site occupied by "St. John's" Church building and the weatherboard manse.

The closing service for the old church was was held on 18th November 1979. The furniture and fittings were removed and the building was subsequently demolished at a cost of $900.

The organ has two manuals of 58 notes, and a pedal board of 30 notes. The pipework consists of 494 second-hand pipes from the Norwood Wesley Methodist organ, and 125 new pipes imported from Holland. The console and organ facade, were also from the old Norwood Wesley organ.