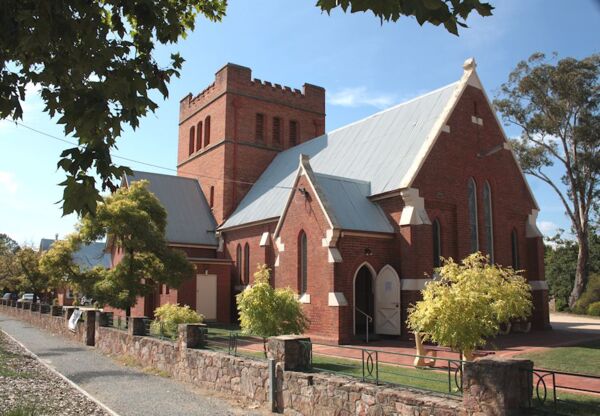 The first Church of England service in Euroa was held in early 1854 by Reverend William Singleton who was currently stationed at Kilmore. By 1857 services were held in the Church of England school room which today is the Rectory kitchen.

Built by the Brewer Brother's it was completed in 1884 at a cost of 800 and this part of the church forms the current nave of today's church. The church was formally opened by the Archdeacon Stretch in 1885.

The Gothic Tower was designed by Louise Williams and Cockrell, built by Hynkley and erected in 1929. The Baptistery and Lady Chapel was added in 1978 by Wilcox and Belcher. The Foundation stone was laid by the Right Reverend the Lord Bishop of Wangaratta 5 November 1929.

A new chancel was opened in 1903and in the same year a glass stained window was bequeathed by the widow of James Birkett.

The Parish Hall was opened in July of 1907 by Bishop Armstrong of Wangaratta.