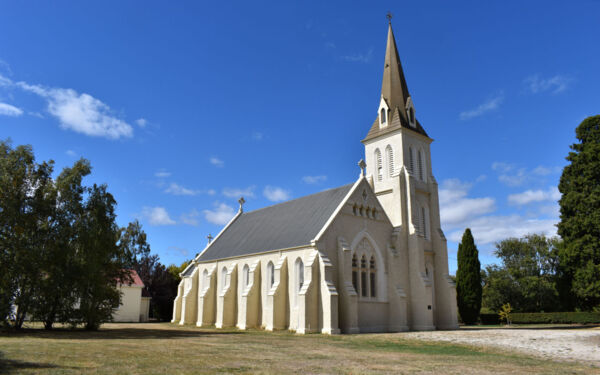 The earliest services were held in a barn and the first schoolroom chapel of brick was built in 1837. in 1931 the Bishop's charge notes Evandale was given the old St. David's font, which was made at Port Arthur. The second church was begun in 1841 and dedicated in April 1844. It was pulled down in 1871. The third and present church foundations were laid, and completed in five months and consecrated in May 1872. This building, of brick roughcast to resemble stone, was designed by Harry Conway in a Gothic Revival style with a steep roof and cost £1,200 and took just 5 months to build. A spire was added in the 1870's and the west end was re-erected in 1909.

The spire was added in 1873 at the expense of a childless local landowner Iohn Whitehead of Winburn. As a member of Parliament he was notable for his advocacy of rigid economy so when his gift to the parish appeared at a cost of 1,050 and rose to a height of 100 feet the locals soon named it Whiteheads folly.

Inside the church two notable features including the stone font which was made at Port Arthur and originally stood in Old St David's church Hobart Town (now replaced by the Cathedral).

The Organ was built by Walker of London and was first installed in the earlier church in 1868.

1. Church plaque
2. The Anglican Church in Tasmania, A Diocesan history to mark the Sesquicentenary 1992 by Geoffrey Stephens
3. Cable Clerical Index