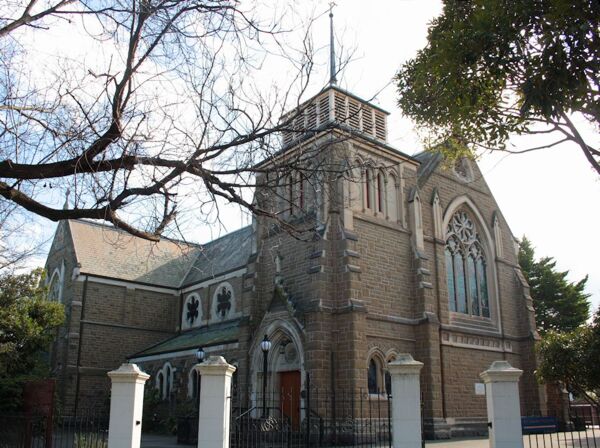 The first Church was a wooden building constructed by the Very Reverend M Carey on the site facing North Road in 1882. It was a temporary building, used as a Church on Sundays and a schoolhouse on weekdays. Extensions were made in 1889. It was blessed by Dr Reville, the Co-adjutor Bishop of Sandhurst, in 1892.

Construction of the present Church was commenced in 1891 and cost 6,000. The Foundation stone was laid on 25 January 1891 by the Most Reverend T.J. Carr D.D. Archbishop of Melbourne.

Built in two stages in 1891 and 1924, stands on a site which has importance in the early history of Catholicism in Victoria as the place where the Mission to Brighton was established c 1854. Substantial rusticated sandstone Church in the Gothic style, founded on a rusticated bluestone plinth.

A large cruciform church in Barrabool stone comprising a clerestoried nave, aisles, tower base, transepts and apsidal chancel built in two stages. The nave was built in 1891 to the design of E J Henderson followed by the transepts and chancel in 1924, designed by Schreiber & Jorgensen. The nave has traceried windows, comparable to Henderson's earlier design for St Mary's Cathedral, Sale, and the large sixfold clerestory windows.

The interior includes an unusually elaborate decorative scheme of 1934 in Opus Sectile mosaic covering the walls of the apse, and a pipe organ by Alfred Fuller of Kew, placed centrally on the rear gallery.

The Church was destroyed by fire in March 2015.

A two-manual organ, originally of 12 speaking stops and of uncertain origin.