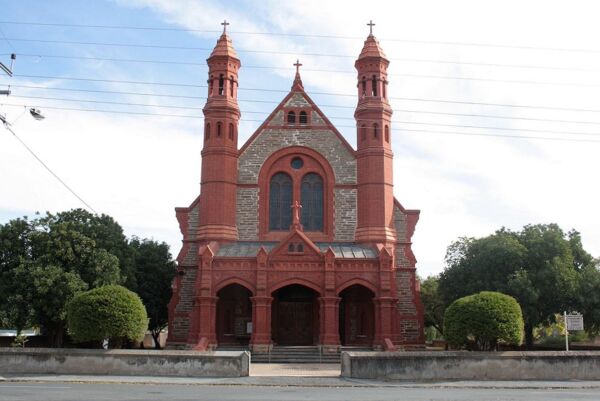 The Gawler Catholic Mission began with the appointment of two English Cistercian Monks – Frs Norbert and Wolfrey, by Bishop of Adelaide, Doctor Murphy – and they arrived in Gawler in August 1848 from Tasmania.

The church is built on the site of Gawler's first Roman Catholic church, built in 1850, which was South Australia's second Catholic church. The Church cost about £3,500 and was opened on 16 October 1898 replacing one that was opened in 1850. It was erected while the Gawler Mission was under the administration of the Carmelite Fathers, who had taken over that Mission in 1881.

The building is characterised by its plan and its exhibition of some of the detail from earlier Mediterranean Roman Catholic church types. Extensive use of the semi-circular arch, emphasised by projecting moulds and strings, is set off by the distinctive treatment of exteriors with terra cotta tiles, bosses and finials. Constructed of roughly squared random-coursed shale, with substantial brickwork to porch, octagonal towers, strings, copings and surrounds to openings. There is vigorous use of hammer-dressed shale, which contrasts with brickwork trim.