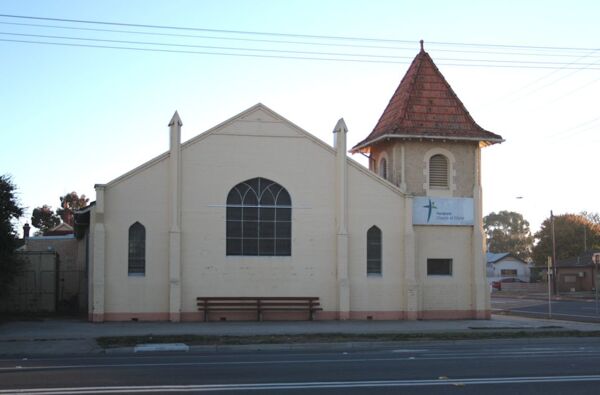 The first service was held on 30 January 1887 by Mr D. W. Little in the Horsham Temperance Hall. Only 6 locals attended however by the evening service more than a dozen showed up. During the first three months thirteen baptisms had been carried out. Until 1915 only local men including Mr Butler, Spicer and Millar, carried out conducing services.*

A wooden church in Urquhart Street was the first church. This was used from 1897 to 1918. By 1917 the new church was under construction. Called the American bungalow style it was built by Mr C Timmins of Melbourne. The dedication service was led by Gilbert Chandler on 16 June 1918.*

When Mr Combridge arrived in 1915 he was the driving force behind the move to the current church. The cost of this Church was 1430.00. By 1955 major repairs and an extension were required. Crack walls were repaired and an extension to the building was commenced.*

Between 1965 and 1969 plans were made to moderise the exterior and interior of the church. The Church hall was bicked out.*