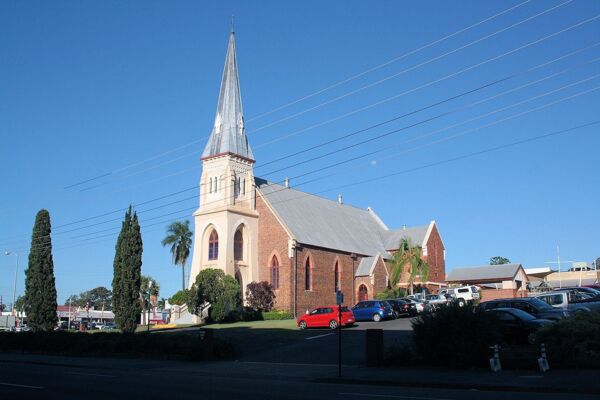 St Stephens Presbyterian Church stands as the second church to be constructed on the current site in 1864 - 1865. This striking gothic style brick church was designed by architect Joseph Backhouse and continues to be the place of worship for one the oldest congregations in Ipswich. The first Presbyterian church service held in Ipswich was by Dr. John Dunmore Lang in December 1844. On 19 October 1851 the Reverend Walter Ross McLeod, of the United Presbyterian Church of South Brisbane, preached to a congregation of 150 people, the largest of any church congregation to that date in Ipswich. Following the induction of the Rev. William Lambie Nelson as minister for Ipswich on 30 August 1853, the congregation began to work towards a permanent worship place for the 'Scots Church of Ipswich'. By early November 1855 a church, 40 feet by 26 feet and with a square tower, had been completed according to the plans and specifications drawn out by Mr John Petrie.**

On 22 February 1859 there were two further grants of adjacent land, for a school house and manse, bringing the total to one acre. Prominent members of the Established Church of Scotland at that time were Arthur Macalister, later Premier of Queensland, John Pettigrew, William Hendren, William Craies and Hugh Nelson (later Sir Hugh). The church took on the name of St Stephens in 1862. This early church proved to have faulty foundations, and had to be replaced. The present St Stephen's church was erected during the time of the Reverend Samuel Wilson, who arrived in 1863, also the year that the twelve independent Presbyterian Church of Scotland congregations united into the one Presbyterian Church of Queensland, with the Rev. Wilson being appointed the first moderator of the united church. The foundation stone for the new church was laid by the Hon Arthur Macalister in August 1865. The architect for the new building was Joseph Backhouse, brother of Benjamin Backhouse who designed Ipswich Grammar School.**

The foundation stone for the church manse was laid on 12 August 1879, and the building opened in January 1880**.

1. The Centenary History of the Presbyterian Church in Queensland. Richard Bardon