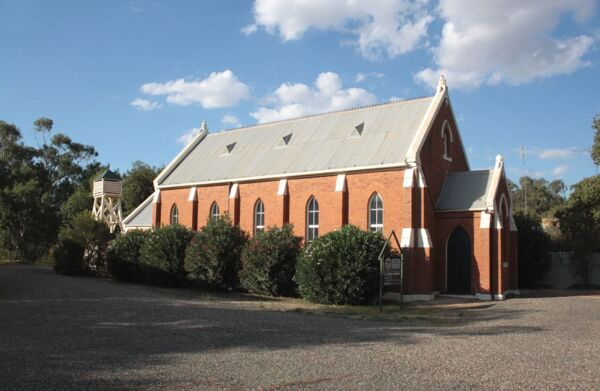 The Church was formerly a Presbyterian church. The first Minister catering to the pastoral needs of the Protestant faith in this district was a Presbyterian Minister from Deniliquin, the Reverend Peter Mercer, from 2 December, 1863, to 10 August, 1869, under commission from the Castlemaine Presbytery in Victoria. Reverend Mercer's original appointment was for the Echuca and Deniliquin Charges, which included the district of Jerilderie.

Following Reverend Mercer's departure from Deniliquin in 1869 there was a brief hiatus until 1872 when Reverend W B Hutchison of Chiltern in Victoria was appointed by the Beechworth Ministry of the Presbyterian Church to take over the Charge at Urana, with responsibility for the residents of the Jerilderie district. Rev Hutchison carried out his pastoral duties for a year before accepting an appointment to Clunes, in Victoria.

In 1880 Induction of Reverend John Dykes and establishment of the Jerilderie Charge with the firist service commencing in 1881 at Berrigan Station.

The Church was opened in August 1884. On June 4 1892 the Foundation Stone fo the Manse was laid. On April 29 1956 a dedication services was held for the Vestry addition to the church.