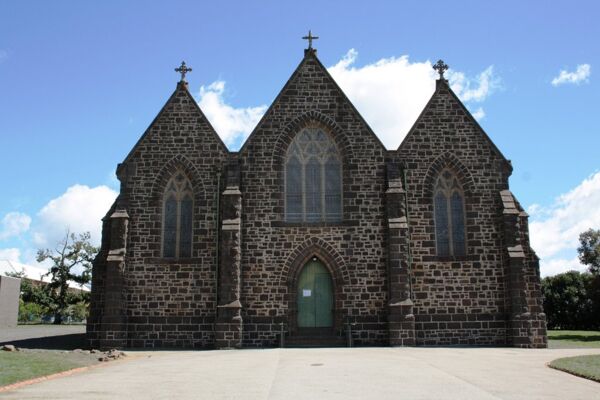 The first Catholic Priest to perform a Mass in Kilmore was the Reverend Father Charles Clarke in 1846. His successor in 1854 was Father T O'Rouke. During his time he set about building a small chapel in the Willomavin area. By 1856 it was decided a bigger Church was required.

Construction commenced in 1856 and the foundation stone was laid on 23 August 1857 by Bishop James A Goold.

Based on the Decorated period of English Gothic architecture the triple-gabled church was constructed of coursed basalt rubble and composed of three gable bays to the East Elevation. The Nave was built in 1860 and the chancel in 1871. The church was dedicated on 8 July 1860 and opened in March 1871.

The church was designed by Hansom Bros and the altar modelled by William Wardell.

The particularly fine main altar of Caen stone was made by Farmer and company of Westminster, London, to the designs of William Wardell, and erected in 1873. The bell, tower and iron palisade fence contribute to the grandeur of the church's design and setting.

Additions were made including the stone and iron fence which replaced a wooden fence.