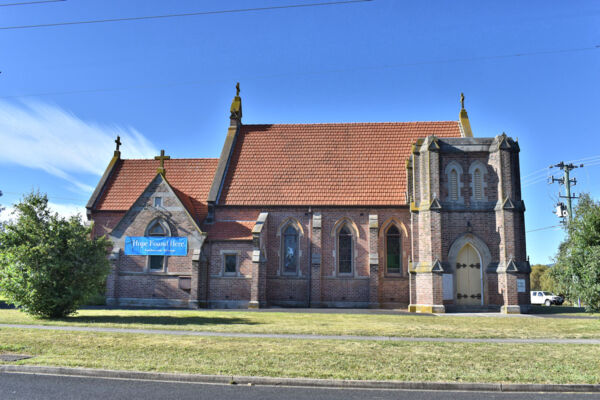 The first Anglican services in the Latrobe district were held at Ballahoo on the western bank of the Mersey River. In 1868 Latrobe School Church was opened at a cost of £145 and in 1871 it was still a school church.

A Church was consecrated in 1887 and in 1892 Church News stated that there were plans for a new Church. Plans for a new church began in  that year and almost two decades were to pass before these were realised. A Foundation stone reads, " To the Glory of God laid by the Lord Bishop of Tasmania 29 November 1906".

The present Church was dedicated in December 1909. The design was described as "modern decorated Gothic on concrete foundations" and the building was constructed in brick with Marseilles tiles employed for the roof. The construction was carried out by Mr H. Biggins, and the building cost £1500.

For a full history visit Churches of Tasmania. Click here.

The pipe organ was giver to the new church in 1909 by a Mr. Munnew, being the fourth and last organ built by the Launceston builder Samuel Jocelyne about 1865.

The present organ at St Luke's Church is believed to be the work of the Launceston-based organbuilder Jesse Biggs who also built the organ now at St Paul's Anglican Church, East Devonport, almost certainly in 1864.