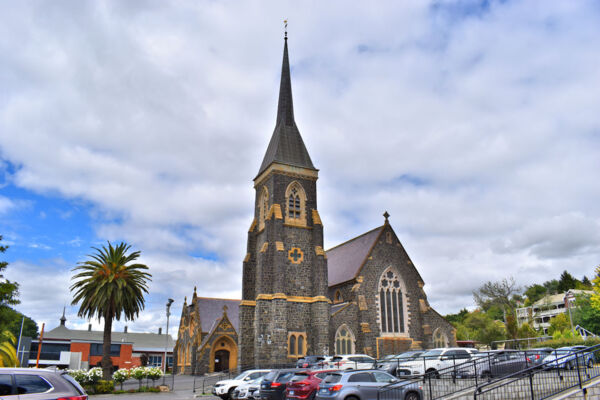 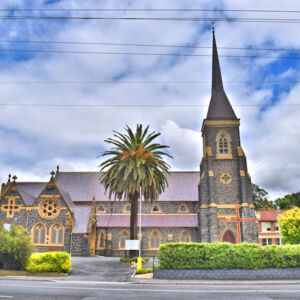 The foundation stone for the St Joseph's church was laid on 19 March 1839 by Rev. Gentleman, and the church was inaugurated in October 1842. Two decades later, St. Joseph's Church began to show signs of decay, and it was decided to replace it with a larger church.

The plans for the new church were drawn by the Tasmanian architect Henry Hunter, and the foundation stone was laid on 15 September 1864 by Bishop Willson. By October 1866 the nave and two aisles had already been built, and on 7 November the church was solemnly opened for religious purposes by Rev. Murphy, Bishop of Hobart. The church was dedicated to Mary, Queen of the Apostles.

A Gothic-Revival church with rusticated dolerite with Freestone dressings. It has a slate roof with stone crosses on gable ends. The 1886 Sanctuary was designed by Alexander North.

Eastern facade has a heavily detailed rose window. The interior pillars of the nave arcades are monoliths of dolerite.

The stained glass windows in the sanctuary of the church represent St. Patrick, patron of the Archdiocese. St. Peter, rock-foundation of the apostolic band founded by Christ, St. Joseph, the incomparable husband of Mary, Mother of God, and St. Francis Xavier, apostle to South East Asia who came close to Australia in the Malaysian archipelago. These together with the window of the Immaculate Conception in the chapel, were all donated by William Dixon in memory of his deceased wife. Ellen.