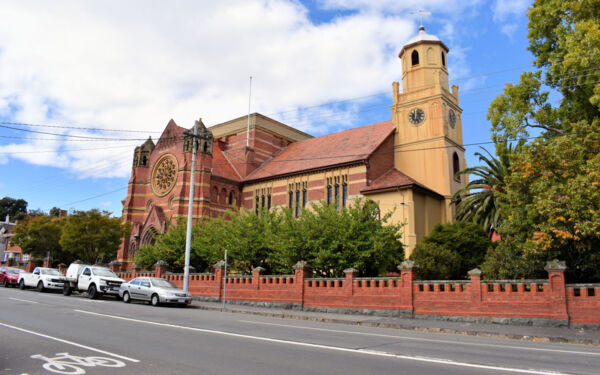 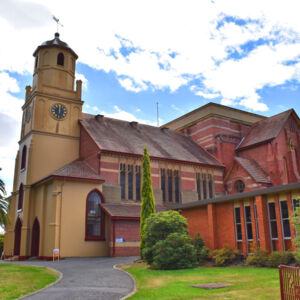 The first foundation stone was laid on the 28th of December 1824 by the Governor of Van Dieman's Land, Sir George Arthur, on land consecrated by the Reverend Samuel Marsden of New South Wales. Construction of the first church was carried out by convict labour. The bricks were made from clay dug n the area opposite the church. The tower was completed in 1830 with one clock face. The present clock was installed in 1835. In 1866 a small chancel was added to this first church and would have come roughly to the centre of the present dome.

The tower and surrounding masonry that can be seen at the west end of St John’s Church is all that survives from the original church of 1824-25 with the Regency Gothic tower added in 1830.

The present building is a structure erected in three separate periods. The first building period, 1824-1830 saw the west tower and the spaces flanking it constructed of red colonial brickwork covered with stucco. They were built in a colonial `gothic' style. The simplicity of David Lamb's design is one of its charms. The side windows of this part of the building are identical with those of the original nave, which had three on each side in addition to those still existing as part of the tower. Between 1901 and 1911 Alexander North's chancel, transepts and crossing were erected in alternating banks of red brick and golden sandstone on heavy bluestone foundations, and roofed with concrete vaults and dome. The style is a unique combination of Byzantine and Gothic Revival of North's own devising. It has fascinated such authorities as Sir John Betjeman and Dr. Lloyd Rees.

The Dome and Chancel Ceiling were left rough finished and were intended to carry mosaic similar to the portion that may be seen in the apex of the dome.

The church is the oldest in the city having started construction in 1824. Though the church is one of the oldest surviving churches in Australia, it has received numerous extensions and modifications with only the tower and first window pair of the nave being original.

The first church organ was removed in 1862, and is now in the St John's Anglican Church, Franklin. The present organ was built in 1862 by Charles Brindley, of Sheffield. For a full description click here.