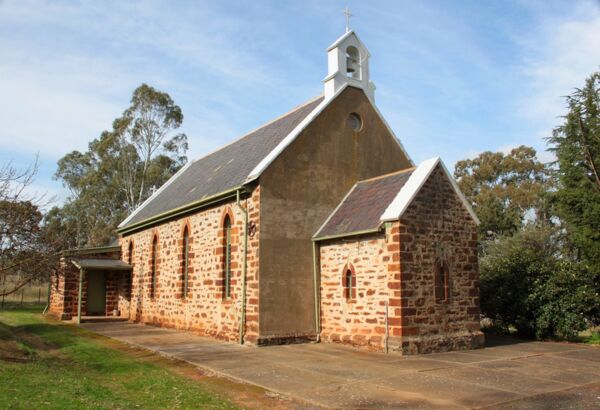 Land for this church was set aside as a gift from the South Australian Company which completed the survey of the Lyndoch Valley in 1839. One acre of land was donated to the Church of England for a  church and cemetery, but before the building was finished the area was flooded and another site had to be found.

Another grant of land in 1850,  this time from the SA Government allowed work to be re-commenced. Nearby ironstone was quarried for the walls and slates for the original sections of the roof, floor tiles and glass were imported from England, and carted by bullock wagons from Port Adelaide. The total cost was £390 and 17 shillings. The main hall of the church was built in 1861, the bell added in 1881 and the chancel In 1909. The Reverend A Sells, a  well known South Australian painter, was Rector here in the 1870s.

It is a small ironstone  church of simple hall form with a projecting porch, with four pointed lancet windows on each side and a  bell gablet. Later repair work has rendered the east wall.

The rectory is of a  later date and was constructed of random sandstone on a bluestone plinth with red brick dressings (circa 1930).

This list may not contain every serving cleric, past or present, for this church.